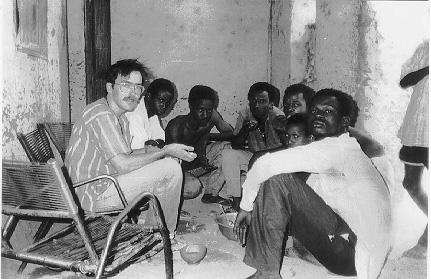 The males of my host family (the Sohs) at the common bowl.

In the Peace Corps, I lived for two years and five months in Sevare, Mali, West Africa, about 150 miles South of Timbuktu. The contract is two years, our training was a longer-than-usual four months, and I spent another month there waiting for the school year to begin. A more typical Peace Corps stint would be two years and two months.

I was a high school teacher, teaching Math up to and including Calculus in French, which was mostly a fun and interesting job. The students were politer than they would be in an American high school, although they happened to be a bit ruder in my town than elsewhere in Mali.

The problem was that my town, Sevare, was at a crossroads between Mali’s one North-South paved highway toward Timbuktu and Gao, and an East-West road between Mopti and Bandiagara, all famous tourist destinations. All the tourists coming through town and giving out handouts made the local children really rude to foreigners like me who couldn’t afford to give on a Peace Corps Salary.

Still, I’d say the benefits of my stint vastly outweighed the drawbacks. I actually really enjoyed being on a 2-year camping trip, which is a bit what it was like: I slept out on the roof under the stars nine months of the year. I lived outside, using my house as a closet, because the houses stay much too hot to be comfortable. I pulled my own water from a well 14 meters deep. I went without electricity. Like poor people the world over, I lived an environmentally moral life, consuming very little of the world’s natural resources, and producing very little pollution. The more I tried to do for Mali, the more Mali gave me. It was a fantastic time.