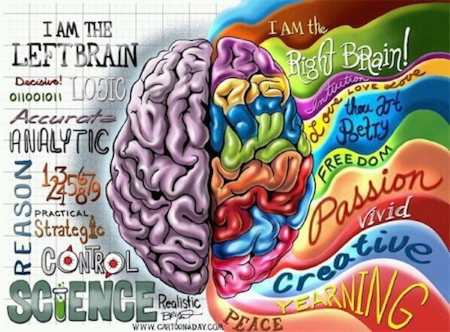 For me, life is all about the division between the left and right brain. This first became apparent at St. John’s College (Annapolis, MD and Santa Fe, NM). The classes there are divided between the left versus right brain (Sciences versus Seminar), as in the image above.

Almost all of education is geared to the left brain. Only a very few colleges in the world emphasize teaching to the right brain, and St. John’s is by far the greatest of them. If you are a student who has always felt like a fish out of water, with skills in discussion courses that are greater than or in balance with your skills in the sciences, then St. John’s is the place for you.

As for me, I felt insecure in my opinions about squishy subjects, and fled to the certainty that I found in math and the sciences, so St. John’s taught me balance. Later I learned that certainty even in the sciences is questionable, in Gödel’s proof, non-Euclidean geometry, modern Physics, and other areas. I will always look back to my time at St. John’s as the greatest years of my life.

It turns out that I’ve led an unusually interesting and adventurous life. I had been thinking of myself as not a very high achiever, but a nice side benefit of doing this website was finding out that I’ve actually done a lot. I’ve traveled in 53 countries for an average of over a month apiece, dabbled in 12 languages, of which I’ve learned 5 well, published a chess problem at age 16, risen to a rating one rank below Expert in the U.S. Chess Federation, learned Shogi and Go, lived with no electricity and no running water near Timbuktu in the fourth poorest country in the world, done assembly language programming and software Engineering for seven years, written some logical mysteries and books of humorous poetry, taught high school calculus in French, learned to juggle balls and pins 20 different ways, trekked to 18,700 feet (5700 meters) on Mount Everest….uh, what more do you want?